The Life of Saint Eleftherios - December 15 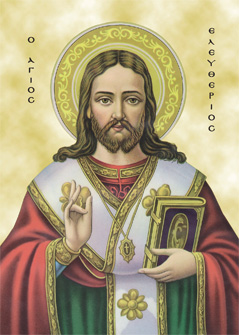 When the phrase "child pro­digy" is mentioned it may bring to mind the name of Mozart, who composed music before he was twelve that is still extant, or Alexander Pope, who wrote the classic poem "Solitude" when he was but eleven years old. It would be difficult to recall any boy genius of religion, but the one who comes closest to this was a Roman lad of the second century. His name was Eleftherios and he was among the first and youngest to carve a niche for himself in Christianity in the eternal city of Rome, where he astounded his elders with his prodigious intellect and early development.

Had his father, a high public official of pagan Rome, lived to guide his immensely talented son, things might have taken a dif­ferent turn for the boy and for Christianity, but his widowed mother, the beautiful Anthia, had accepted Christianity with all her heart. It followed, therefore, that the boy's talents would be applied to Christian endeavor, and he was as quick to embrace the Messiah as he was quick to acquire knowledge. His enormous capacity for learning so accelerated his intellectual pace that he outdistanced his teachers, one of whom suggested to Anthia that she take this marvelous boy to the bishop of Rome, Aniketos, who after witnessing the boy's intellectual display took him under his personal supervision.

Evincing a desire to serve the Savior that was as profound as his learning, Eleftherios embarked on a meteoric career as a man of the cloth, acquiring before he was twelve the equivalent of a college education and with such impressive credentials was ton­sured a reader at the age of thirteen. When he was fifteen years old he was ordained a deacon and at the age of seventeen was ordained a priest of the Christian Church. With such early momen­tum propelling him and with an ever-increasing hope to serve Christ in the highest tradition of the apostles, he was elevated to the episcopacy at the age of twenty, the youngest bishop ever to reach that pinnacle through his own efforts.

As bishop in Illyricum, Eleftherios promoted the cause of Christianity with the adroitness of a seasoned campaigner, giv­ing added impetus to the Christian movement at a time when the merciless persecutions not only made it difficult to win and hold converts, but also at a time when the gravest danger was in be­ing a high-ranking prelate of the Church. Oblivious to this threat, he was acclaimed in the inner circle of Christianity as the brightest luminary of Christian Rome since the apostles. Even those whom he failed to convert held him in the highest esteem, and with this immense popularity he grew bolder and thereby more offensive to the state. This outstanding theologian, orator and benefactor of Christian and pagan alike was finally mentioned to Emperor Hadrian, who ordered his arrest.

Ordinarily the emperor would have questioned him personal­ly because of his high station, but fearing a reprisal because of the prelate's popularity, Hadrian dispatched his most trusted cen­turion, a man named Felix, to bring the bishop before the prefect of Rome for trial and punishment. The centurion decided that rather than run the risk of seizing Eleftherios publicly he would seek out his place of worship and arrest him there. After some time Felix found the well-hidden church and crept in just as the bishop was commencing a sermon. The oratory of the brilliant Eleftherios was spellbinding, and when the sermon was over Felix came forth and asked to be converted to Christianity.

This done, Felix exposed his purpose and apologized for hav­ing come to the house of God with treachery in his heart. He was easily forgiven by Eleftherios, who thereafter instructed the cen­turion to return him to the prefect lest judgment be passed on both of them. With a great deal of reluctance Felix took the bishop to what appeared to be a sealed fate, offering along the way to help Eleftherios escape. But the proud prelate would not hear of it.

With the emperor conspicuous by his absence, Eleftherios went on trial before the prefect, but not even his oratorical power could save him. The bishop was cast into prison, tortured, and put to death. He died for Christ on December 15.