The Shrine of Patriarch Athenagoras 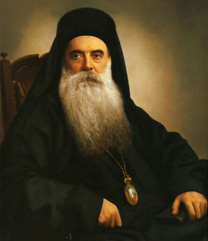 The following is a short eulogy written by Father George Poulos and printed in his bulletin upon hearing that he fell asleep in the Lord. It is being offered with the hope that it will remind us the greatness of this prelate.

"HE NOW WALKS WITH GOD"

At any other time in the world's history he would have been outstanding, in the twentieth century he was magnificent.  Had His Holiness Athenagoras lived in any of the twelve centuries of the Byzantine Empire his place in the annals of mankind would have been assured by a glorious prominence in an all powerful Church.  That his epic achievements were brought about at the nadir of Greek Orthodox influence is all the more remarkable.  One need not be a believer in miracles to realize that God must have chosen to place Athenagoras among us at a time when whirlwinds of dissidence had weakened the original house of Christianity to the point of destruction.

The greatness of Athenaqoras stemmed principally from his unfaltering reliance on love, on truth, on virtue, on God.  He did noble things all day every day of his life and so made "life, death and that vast forever one grand, sweet song." All hearts grew warmer in his presence simply because he gave love unceasingly "out of God's limitless treasure.,' He believed that "the sole sacred thing beneath the cope of Heaven is Man", and his love for all mankind was boundless.

The legacy of this most holy man is summed up in his tender statement that reads: "Love is my personal creed.  Love is my philosophy. Love is my policy.  Love is my mission.  Love is my task.  Love is the substance of my joy. Love is my destiny." Jesus said "suffer little children and forbid them not to come unto me for of such is the kingdom of heaven." To which Athenagoras, who adored children, added: I see the glory of God in their eyes."

At an age when most men would have been content to rest on their laurels, Athenagoras was looking ahead to the great task of solidifying into one great family the splinters of Orthodoxy that have been strewn over the globe for more than a thousand years.  His passing leaves this monumental assignment to others, but there is little doubt that the grand manner of Athenagoras would have prevailed in this undertaking as it had in so many others.

It would appear that his great physical height was a divine endowment to compliment the great size of his genius and holiness. His towering figure was imposing yet his benevolent gaze and genuine humility elevated man, woman and child to his own lofty level.  He would have made the perfect model for any of Michelangelo's epic religious sculptures.

His biography, by not,) well chronicled, can be briefly described.  No amount of words can adequately describe his myriad achievements. His were not the humble beginnings of the folk hero.  He was the son of a doctor and was born in Vasiliko, Epirus on a commemorative day March 25, 1886.  That day marks the day of Annunciation when the angel of God appeared to Mary to tell her of her destiny.  He attended the seminary of the Patriarchate at Halki, was ordained deacon in 1910 and was made Metropolitan of Corfu in 1922, thereafter distinguishing himself as a spiritual leader and crusader for the rebirth of Orthodoxy.

In 1931, Athenagoras was made Archbishop of North and South America and came to the New World to find divided Churches that were like so many beads of mercury on a marble floor.  A lesser man would have recoiled at the sight of the chaos that inherent divisiveness among Greek worshippers had wrought.  The new Archbishop calmly eased tensions, allayed fears, and with the swift dispatch that could come solely from his great love for all people, he brought about harmony and unity where there had been hostility and distrust.  Along with establishing the strong Church we know today, he founded the orphanage of Saint Basil's Academy, the Philoptochos Society, and to his everlasting glory, the Seminary of the Holy Cross.  His mission in America fulfilled, he was called to greater service by his election as Patriarch in 1948.

With complete dedication, to the concept of brotherly Love, Athenagoras devoted himself to reconciliation with ancient dogmatic foes and initiated the overtures that led to his historic embrace of Pope Paul in 1964, thus. bridging the gulf between West and East that has endured since the Great Schism of 1054.  He also led the efforts of the Orthodox clergy to have Orthodoxy acknowledged as a fourth major Faith.

It is regrettable that the Patriarchate has been for centuries seated in an obscure corner of Istanbul and has therefore been condoned where in another setting it would be glorified. The restrictions, limitations and general harassment imposed by a traditionally hostile Turkish government have served to dull the luster of many Patriarchs, but the light of love exuded by Athenagoras never ceased to escape the dismal miasma that hovered over him and served to brighten all other parts of the world.

Those of us who were privileged to have known him now grieve his loss "as when a lordly cedar . . . goes down with a great shout upon the hills and leaves a lonesome place against the sky.

His only survivor was a sister and a family of 250,000,000 Orthodox worshippers.  Patriarch Athenagoras "fought the good fight" perhaps his only regret was that his dream to walk once again in his garden. (Central Park) did not come to pass, but he who walked with princes, presidents and paupers, now walks with God. .

May God rest his noble soul.